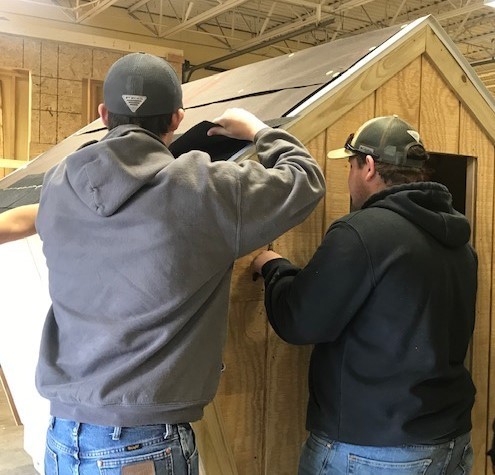 With Albemarle County Public Schools’ operating virtually this school year, two Charlottesville-Albemarle Technical Education Center (CATEC) students have been able to continue their hands-on learning for the last eleven months. Monticello High School Seniors Daniel Snoddy and William Gilbert, both returning Building Trades students, have been working as interns at Southern Air Inc. since February 2020. When schools unexpectedly went virtual in March due to COVID-19 concerns, Snoddy and Gilbert were already interning at Southern Air Inc. for half of the day, earning high school credit and pay through their on-the-job training. Sierria Phillips, Southern Air Inc.’s Director of Personnel Development, says, “We have been following Center for Disease Control, Virginia Department of Health, and Virginia Occupational Safety and Health standards since March. Thankfully by us all doing our part and being safe, we all are continuing to work, even during a pandemic.” Virtual learning has allowed Snoddy to work 40 hours per week. He says he does his school work in the evenings when he gets home from work. Gilbert either works half of a day or a full day, depending on his academic needs.

Snoddy says he wanted to take CATEC’s Building Trades class last year because, “I love working with my hands, building things, and wanted to further my knowledge in the construction trades.” Gilbert says he wanted to take the class because he was “hoping to get an opportunity in the building trades world.” Building Trades Instructor Sid Trimmer says of the young men, “Both Daniel Snoddy and William Gilbert are really good students. They took the class and lab work seriously, and showed me they were serious about their careers. I have had excellent reports from their employers as well.” Snoddy wanted to participate in an internship because he wanted to learn even more about the trade. Gilbert wanted “an opportunity to get a head start on my journeyman’s license and to be able to have a job when I graduate.”

Snoddy says that his time at CATEC helped prepare him to take on work at Southern Air Inc. He says, “I learned so many things that have helped me with not only my apprenticeship, but my real-world experiences.” Snoddy and Gilbert both say they have learned a lot of skills while working on internship. They have gained experience bending conduit and running pipes; pulling wire; wiring light fixtures, outlets, switches, specialty motorized switches, and some HVAC devices; installing wiremold, and worked with outdoor lighting. Gilbert says his time at Southern Air, Inc. has taught him so much that he wouldn’t have been able to learn from class alone. He says he has been able to see what really happens on a job site, rather than learning solely in the classroom.

Southern Air Inc.’s Keith Bourne supervises Snoddy and Gilbert. Of both interns, he says, “William and Daniel are two great apprentices. What makes them great is their strong work ethic and desire to not just learn their trade, but to excel at it. Both of these young men are inquisitive and question why we are doing things the way we are and want to understand the engineering behind our installations. They understand that they are part of a team and want to be contributing members of that team. It has been my pleasure working with these two respectful men.”

Phillips says it is important for Southern Air, Inc. to maintain its strong relationship with CATEC because “construction is facing a growing workforce shortage. Yet, the industry faces the challenge of long-standing stereotypes and negative perceptions- especially among parents who are concerned about their children and their career plans. We work hard to build a relationship with the local high schools and trade classes.” In 1995, to meet the demands of their customers, Southern Air Inc. created “The Wheels of Learning” program, a pipeline to hire, train, and retain employees.  This program provides hands-on training in a variety of fields that includes electrical, plumbing, heating and air, and sheet metal. Participants range from high school students to adults, giving people of all ages opportunities to earn their journeyman’s license in their chosen field. Students attend classes two nights a week, using National Center for Construction Education and Research (NCCER) curriculum. Phillips says Southern Air Inc. is one of the few programs certified through the Commonwealth of Virginia that allows their students who complete 8000 hours of classroom & on-the-job training with us to be granted a journeyman’s license without sitting for the test with Department of Professional and Occupational Regulation. They have partnered with technical schools like CATEC in the Charlottesville-Albemarle area so their employees working and living in Central Virginia can have these career opportunities.

Snoddy and Gilbert hope to continue working at Southern Air Inc. when they graduate from high school in June 2021. They both plan to get their electrical journeyman’s license. Snoddy says, “my experience, not only at CATEC but also Southern Air Inc., has been a blessing and has helped me learn so much in such a short period of time. This will help me be successful for the rest of my life.” Gilbert wants more CATEC students can take advantage of this opportunity, hoping that Southern Air, Inc. can recruit students from CATEC this year as well. Phillips says, “Construction opens doors. With a career in the construction industry, there are lots of options!”